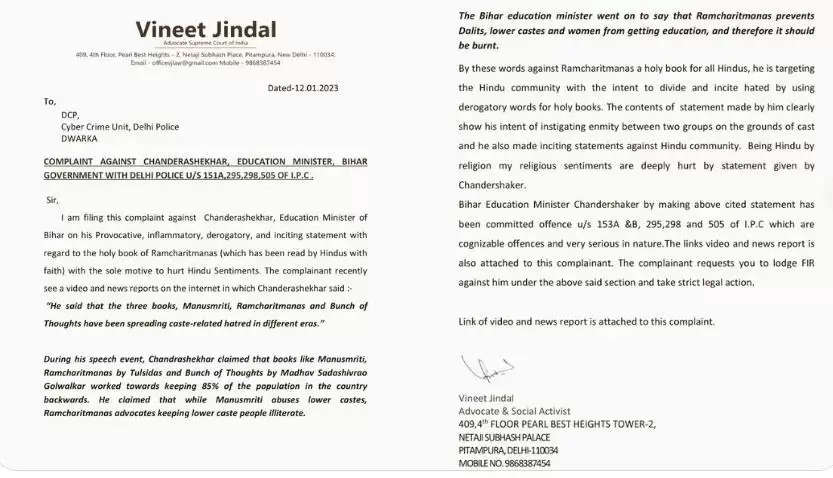 A day after Bihar Education Minister Chandrashekhar sparked a major controversy by saying that Ramcharitmanas should be burnt like Manusmriti as it promotes caste division in society, the complaint was registered. against him

Advocate Vineet Jindal stated that he has requested the Delhi Police to register an FIR against the minister and take strict action against him.

Vineet Jindal said that Dr. Chandrashekhar made provocative, scandalous, derogatory and fiery statements about the holy book of Ramcharitmanas, faithfully read by Hindus, with the sole motive of hurting the sentiments of Hindus.

A complaint registered with the cyber crime branch of the Delhi Police says, "During his speech event, Chandrashekhar claimed that books like Manusmriti, Tulsidas Ramcharitmanas and the body of thought of Madhav Sadashivrao Golwalkar helped preserve 85 percent of the population. He claimed that during Manusmriti. the lower castes, the Ramcharitmanas support the lower caste people reading like illiterates. The Bihar Education Minister went on to say that Ramcharitmanas prevents Dalits, lower castes and women from getting education and therefore it should be burnt."

Lawyer Vineet Jindal says that with these words against Ramcharitmanas, a holy book for all Hindus, Minister Chandrashekhar. aimed at the Hindu community with the aim of dividing and inciting enmity by using words derogatory to holy books. The content of his statement clearly shows his intention to incite enmity between two caste-based groups and he also made inflammatory statements against the Hindu community, Jindal added.

The lawyer said that since he is a Hindu by religion, he was offended by the statement of Chandershaker deeply his religious feelings. He claimed in the complaint that the Bihar Education Minister committed offenses under Sections 153A and 8, 295, 298. and 505 of the IPC.cognizable and very serious in nature

Paste links video and news report in and also the complainant Jindal requested the Delhi Police that he should introduce Chandra. FIR against shekhar under said sections and would take strict prosecution.

This is often a deliberately misinterpreted translation of the verse because the word poisonous does not appear in the verse as claimed. This means that just as a snake feels happy after drinking milk, a speaker named Adham Jat also feels happy after education.

Bihar Education Minister said that Ramcharitmanas are preventing Dalits, lower castes and women from getting education and therefore they should be burnt. Dr. Chandrashekhar further said that RSS is spreading hatred in the country.

After the speech, addressing the journalists present, he repeated his position. He said that Manusmriti planted the seeds of hatred, then Ramcharitmanas helped grow it and now Golwalkar's book expands it.

He added that Ambedkar burnt Manusmritis because it talks about disenfranchisement of Dalits. Similarly, Ramcharitmanas also has several such verses, he argued.

Meanwhile, Bihar Chief Minister Nitish Kumar has decided to distance himself from the issue after reporters asked him for comments on the issue claiming that he was not aware of it. "I don't know what he said. I haven't heard his statement or seen anything about it in the news," the Bihar chief minister told reporters in Darbhanga on Thursday.

Meanwhile, Chandrashekhar stood by his stand even on Thursday, saying the BJP should apologize for not knowing the facts.