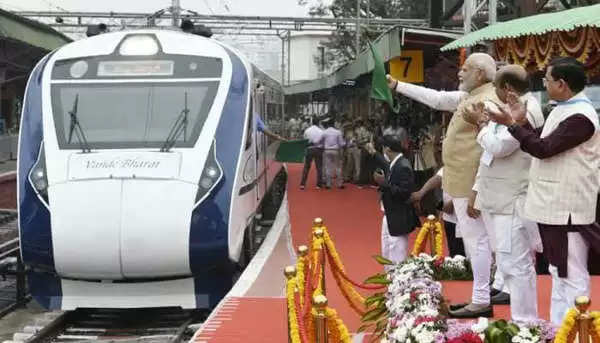 The Prime Minister will flag off an ultra-modern semi-express train at 10:30 am

The Minister of Railways also bought a million from the One Station One Product store at the railway station.

Next Generation Semi Fast Vande Bharat Express will arrive at platform number 9 at 08:30 hrs. Arun Kumar Jain, General Manager, Southern Railway, will deliver the welcome address (9.20 am), followed by the speech of the Governor and Union Ministers (9.30 am onwards). The short film will be shown at 10.25 and Prime Minister Narendra Modi will get off the train at 10.30.

This is the eighth semi-fast train in the country and the second train in South India. The train is equipped with high-class passenger equipment. The train shortens the journey time from an average of 12 hours to 8 hours and 30 minutes to cover a distance of 699 kilometers. The train can reach a maximum speed of 160 km/h. During the journey between Secunderabad and Visakhapatnam, the train makes regular stops at Rajahmundry, Vijayawada Junction, Khammam, and Warangal. The train runs six days a week except for Sunday.

Vande Bharat consists of 1 AC seat coaches and two Executive AC seat coaches with a capacity of 1128 passengers. The ticket booking process has already started. You must visit the passenger reservation system (PRS) or via the Internet.

Other Vande Bharat running in India-