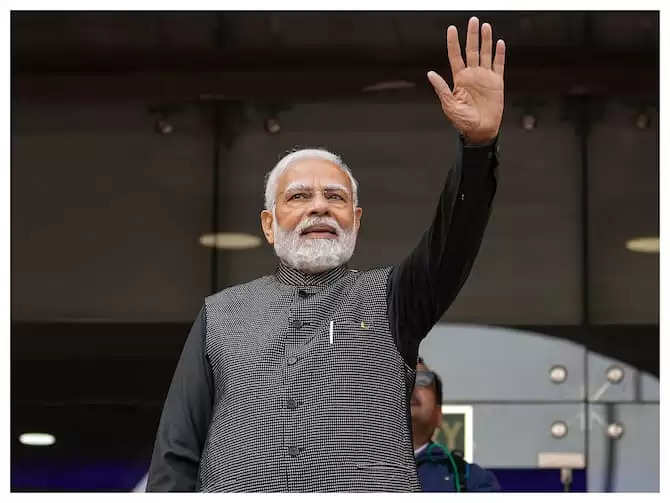 Prime Minister Narendra Modi is scheduled to travel to Karnataka and Maharashtra to dedicate and officially launch a number of development projects totaling Rs 49,600 crore that will significantly improve infrastructure.

PM Modi will visit the districts of Yadgiri and Kalaburagi in Karnataka in the morning, where he will lay the cornerstone for and officially open a number of development projects pertaining to irrigation, drinking water, and a National Highway development project at Kodeka in the Yadgiri district.

The cornerstone of the project, which aims to give all homes with access to individual household tap connections that deliver safe and sufficient drinking water, The foundation for the Yadgir district's multi-village drinking water delivery network will be placed at Kodekal. According to the plan, a 117 MLD water treatment plant would be constructed. The Yadgiri district project, which has an estimated cost of more than Rs 2,050 crore, will provide potable water to around 2.3 lakh households across more than 700 rural settlements and three towns.

The Prime Minister will also dedicate the Narayanpur Left Bank Canal - Extension Renovation and Modernization Project during the occasion (NLBC-ERM). The project can irrigate 4.5 lakh hectares of command area with a canal carrying capacity of 10,000 cusecs. More than three lakh farmers in 560 villages in the districts of Kalaburgi, Yadagir, and Vijaypur will profit from it. According to estimates, the project will cost roughly Rs 4,700 crore the PMO declaration.

Basavaraj Bommai, the chief minister of Karnataka, described the modernization of the Narayanpur Left Bank Canal (NLBC) as a model for the entire nation and a significant turning point in the irrigation sector prior to the Prime Minister's programme there.

A total of 1,475 unrecorded habitations have been designated as New Revenue villages in the five districts of Kalaburagi, Yadgiri, Raichur, Bidar, and Vijayapura in order to achieve the Prime Minister's goal of 100% saturation of government programmes.

PM Modi will travel to Malkhed village in the Kalaburagi district in the afternoon, where he would hand out title deeds (hakku patra) to those who qualify from the newly proclaimed revenue villages.

the distribution of title deeds to more than 50,000 individuals, many of whom come from underrepresented groups Providing legal government registration for the SC, ST, and OBC vulnerable communities' land is a step toward making them eligible for government amenities like drinking water, power, roads, etc.

The 71 km segment of NH-150C will have its foundation stone laid by the prime minister during the event. The Surat-Chennai Expressway also includes this six-lane Greenfield Road project. At an estimated cost of over Rs 2,100 crore, it is being constructed.

Six states—Gujarat, Maharashtra, Karnataka, Telangana, Andhra Pradesh, and Tamil Nadu—will be traversed by the Surat-Chennai Expressway. The route will be shortened from 1,600 km to 1,270 kilometres. PM Modi will arrive in Mumbai by the evening to officially open and lay the 38,800 crore rupee project's foundation stone was laid in Mumbai. He will ride the metro while also officially opening two lines in Mumbai.

He would also donate to the country around Rs 12,600 crore to Mumbai Metro Rail Lines 2A and 7, which will help to offer seamless urban mobility. While metro line 7, which connects Andheri E and Dahisar E, is around 16.5 km long, metro line 2A, which connects Dahisar E and DN Nagar, is about 18.6 km long.

In 2015, the foundation stone for these lines was set by the prime minister.

PM Modi will also introduce the National Common Mobility Card and the MUMBAI 1 mobile app during his visit (Mumbai 1). The software will make travelling easier and can be displayed at the entrances to metro stations, and it accepts digital payments for UPI ticket purchases.

The National Common Mobility Card (Mumbai 1) will first be utilised on metro routes, although it can also be used on regional trains and small buses. The NCMC card would enable speedy, contactless, digital transactions, hence facilitating a seamless experience and eliminating the need for commuters to carry numerous cards or cash, according to the PMO statement.

The Prime Minister will also lay the cornerstone for the renovation of three hospitals in Mumbai: the 152-bed Oshiwara Maternity Home, the 306-bed Siddharth Nagar Hospital in Goregaon (West), and the 360-bed Bhandup Multispeciality Municipal Hospital.

A 400-kilometre road concretization project in Mumbai will be started by the prime minister.

An estimated Rs 6,100 crore would be spent on the development of this project. More over 1,200 kilometers (km) of Mumbai's 2050 km of total highways are arterials of roads have already been concreted or are currently being concreted. However, the roughly 850 km of remaining roads are plagued by potholes, which have a negative influence on transportatio