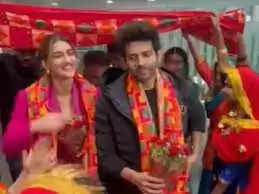 Kartik Aaryan and Kriti Sanon starrer film Shehzada will soon be released in theatres. At this time both are heavily engaged in the promotion of the film. On January 14, the whole country is celebrating Pongal, Lohri and Makar Sankranti. On this occasion, Kriti Sanon and Karthik Aryan came to celebrate the festival of Lohri among the fans, where they danced fiercely with their fans and had a lot of fun. Its video is becoming quite viral on social media and people are liking it a lot.

The makers have done something special for the promotion of Shehzada. After a grand launch in Mumbai, Kartik Aaryan and Kriti Sanon reached Jalandhar, Punjab on January 13 to celebrate Lohri and launch the trailer. Both were welcomed with Dhol and Bhangra. Both wore red dupattas on the occasion of Lohri and people welcomed them with flowers. Kriti Sanon and Karthik Aryan had a lot of fun with the people and performed Bhangra.