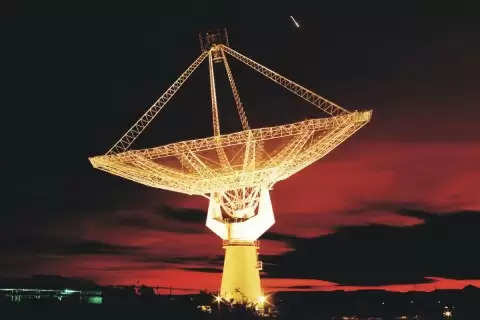 Scientists have made an exciting discovery by picking up a type of radio signal from a galaxy nearly 9 billion light years away from Earth.

A galaxy called SDSSJ0826+5630 was found to emit a radio signal at a specific wavelength called the "21 cm line", also known as the hydrogen line. This signal is emitted by hydrogen atoms and astronomers use it to locate galaxies in the universe.

The detection of this radio signal, the first of its kind from such a great distance, will allow scientists to probe deeper into the mysteries of the early universe. Arnab Chakraborty, a cosmologist and co-author of the discovery study, said: "This corresponds to going back in time 8.8 billion years ago." The signal was sent from the galaxy when the universe was only 4.9 billion years old.

Researchers in India and Montreal picked up a radio signal with the Giant Metrewave radio telescope. The discovery was announced this week in the Monthly Notices of the Royal Astronomical Society. The weak signal was able to be detected at such a record distance thanks to a naturally occurring phenomenon known as gravitational lensing.

Scientists have found that the atomic mass of the gas content of this galaxy is almost twice the mass of the stars that we can see. This is a new opportunity for scientists to understand the cosmic evolution of stars and galaxies. It is important to note that this signal was not sent by aliens, but rather by a naturally occurring star-forming galaxy.