Protests over plans to raise the retirement age in France 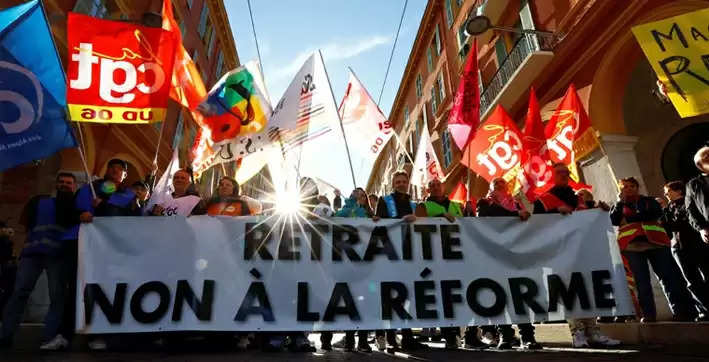 Protests in major French cities including Paris, Marseille, Toulouse, Nantes, and Nice disrupted train services, flights, schools, and businesses across the country. The Eiffel Tower was closed to visitors, CNN reported.  The French interior ministry said more than a million people took to the streets across the country, including 80,000 in Paris, where small groups of protesters pelted riot police with bottles, stones, and fireworks.

The eight largest unions have called for "immediate strikes and demonstrations" against pension reforms announced by President Emmanuel Macron's government, CNN reported.  French citizens must legally work until the age of 64, up from the current age of 62, to receive a full pension.

The French government has said it is necessary to tackle a pension deficit, but the reforms have angered workers at a time when the cost of living is rising.  Macron's proposed pension reforms come as workers in France, as elsewhere, are being squeezed by rising food and energy bills, CNN reports.

France spent almost 14 percent of its GDP on public pensions in 2018, which is more than most other countries, according to the Organization for Economic Cooperation and Development.

Teachers and transporters did not show up for work. According to the French Ministry of Education, more than 40 percent of primary school teachers and more than a third of secondary school teachers went on strike. French rail authority SNCF said there were major disruptions on, train lines in France and Paris metro lines were partially or completely closed, the city's transport authority RATP said on Twitter.

Meanwhile, Eurostar canceled several flights between the French capital and London, and some flights from Orly airport were scratched, according to its website.  Charles de Gaulle Airport reported "some delays" from hitting flight controllers, but CNN reported no cancellations.

The CGT, one of France's largest trade union confederations, has drawn around two million people in more than 200 demonstrations across the country and announced that most workers at the TotalEnergies (TOT) refinery have walked out, disrupting the supply of petroleum products. TotalEnergies (TOT) said it would not affect the supply of fuel in its network of petrol stations.

Pension reform has long been a contentious issue in France, with street protests stalling reform efforts in 1995 and successive governments in 2004, 2008, and 2010 facing stiff opposition to the changes finally approved.  Macron's previous attempt to reform France's pension system faced nationwide strikes in 2019 before it was abandoned due to the Covid-19 pandemic.  French unions will meet Thursday evening to decide whether to continue the strike, CNN reports.