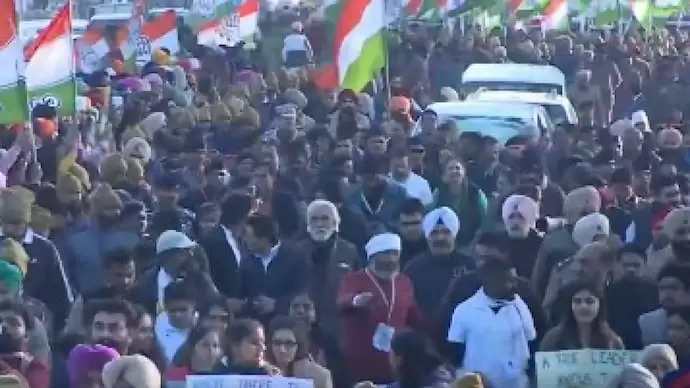 Numerous individuals joined the Rahul Gandhi-led Bharat Jodo Yatra on Monday as it began in Adampur, Punjab, despite the bitter weather.

Gandhi was accompanied by a number of Congress leaders, including Amrinder Singh Raja Warring, the head of the state party, as the march left the Kala Bakra neighbourhood in Jalandhar.

The wife of former Punjab Congress chairman Navjot Singh Sidhu, Navjot Kaur Sidhu, participated in the yatra in Hoshiarpur. Gandhi had her follow him while they were marching.

In a 1988 case involving a fatal road rage incident, Navjot Singh Sidhu is currently being held in Patiala Central Prison while serving a one-year sentence.

As part of its trek across Punjab, the yatra entered the Hoshiarpur district later in the day. It would spend the night at Urmar Tanda.

Before speaking to the media, Congress General Secretary Jairam Ramesh, who is in charge of communications, made fun of Prime Minister Narendra Modi for his roadshow in Delhi.

It is event management, he declared. He cited the "overwhelming" reaction to the Bharat Jodo Yatra as evidence that the BJP was uneasy.

Amrinder Singh Raja Warring, head of the Punjab Congress, stated that the yatra, which was travelling through the state, was receiving a tremendous amount of support.

He stated that the yatra will travel via Himachal Pradesh and arrive in Mukerian on Tuesday.A rally will take place in Pathankot on January 19. The yatra will reach Jammu after the gathering, according to Warring.

Gandhi will raise the national flag in Srinagar, the summer capital of Jammu and Kashmir, on January 30 when the march, which began on September 7 in Kanyakumari, Tamil Nadu, comes to an end.

The march was put on hold on Saturday for a full day due to the passing of Congressman Santokh Singh Chaudhary. During the yatra, the MP had experienced a heart arrest. On Sunday, he was cremated at Jalandhar's Dhaliwal village, where he was born.

In Jalandhar, the march had picked back up on Sunday afternoon.

On Wednesday, the march's Punjab leg began at Sirhind, Fatehgarh Sahib. On Friday, the yatra was suspended in observance of the Lohri festival.