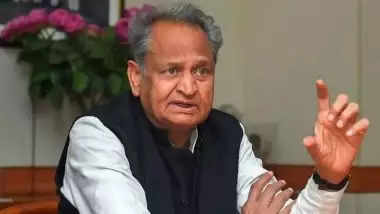 Restore the old pension scheme in the country

He emphasized the right of citizens to social security in the country. "Former Prime Minister Dr. Manmohan Singh and former Congress leader Sonia Gandhi made laws in Parliament on the Right to Information, Right to Education, and Right to Food Security. Similarly, the Right to Social Security Act should be passed in Parliament," he said.

CM Gehlot attacked the opposition for criticizing the country's "zero tolerance" for corruption. "The Anti-Corruption Bureau (ACB) has taken zero tolerance on corruption in the state. But the opposition is only criticizing it," he said. He further claimed that since the registration of FIR has been made mandatory, the number of crimes in the state has reduced by five percent.

"We have ensured that an FIR is registered for any crime committed in the state. The crime rate in Rajasthan has decreased by 5 percent in 2021 compared to 2019, according to NCRB data," he said.