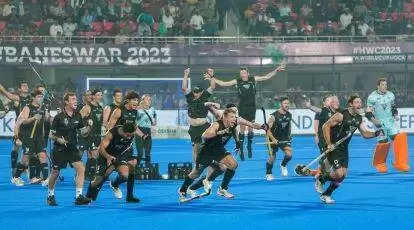 India was eliminated from the current Hockey World Cup after the hosts suffered a challenging 4-5 loss in the penalty shootout against New Zealand in the crucial crossover match on Sunday in Bhubaneswar.

New Zealand held their composure and outwitted India in sudden death to end an instant classic and secure a place in the quarterfinal after both teams tied the score 3-3 after regulation and there was no way to break the tie in shootouts. Indian goalkeeper PR Sreejesh made three fantastic saves but was replaced by Krishan Pathak after he hurt himself during the process. Pathak also made a few vital stops, but Shamsher was unable to defeat the Goalkeeper for New Zealand, making a third attempt.

India dominated the game in terms of possession and circle penetration, but the hosts experienced a number of anxious moments. Both teams began the game with high levels of intensity as New Zealand came perilously close to scoring in the first quarter. But Sreejesh's outstanding save prevented New Zealand from taking the lead right away, and the first period ended with no points scored.

Lalit Kumar Upadhyay scored the game's first goal inside the opening three minutes of the second quarter, which saw India put on a significantly stronger performance. With just over six minutes left in the half, India was subsequently given a penalty corner. During the set piece, the home team scored, but the goal was overturned due to a New Zealand referral. After receiving back-to-back penalty corners, India's dominance continued, and the hosts soon doubled their advantage when Abhishek converted on the rebound after the New Zealand goalie had made a save.

However, Lane provided some relief for the New Zealand team by scoring their first goal with only one minute left in the quarter.

Sean Findlay's crucial deflection near the post from a penalty corner allowed New Zealand to score the equalizer in the last frame. New Zealand nearly took the lead after A New Zealand player was openly located after Jarmanpreet's ball was deflected. However, Pathak effectively foiled his plan.

After India's third and fourth attempts in the shootout were missed, New Zealand took the lead. Sreejesh, who replaced Pathak, made three consecutive stops to put India on the offensive, keeping them in the game.

Although Pathak gave it his all, the visitors ultimately prevailed in the match.