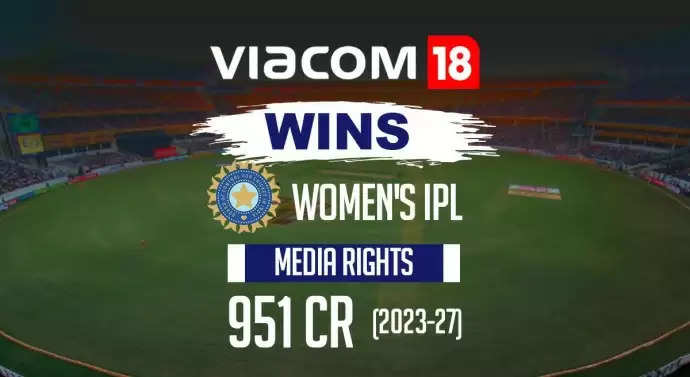 Viacom18 has bagged the media rights of the upcoming Women's IPL, earning a whopping Rs 951 crore over five seasons from 2023 onwards. BCCI is expected to launch its ambitious T20 league before this season. Women cricketers on the lines of the Indian Premier League this March. As per the bidding process, BCCI is pleased to announce that Viacom18 Media Private Limited is the successful bidder for the consolidated bid for the media rights (ie Global Television rights). and Global Digital Rights).

"Viacom18 Media Private Limited will acquire the media rights from WIPL season 2023 to WIPL season 2027 for a cumulative sum of INR 951 (or INR 7.09 per match). This is subject to final completion of documentation," the BCCI said. . in a statement on Monday. BCCI president Roger Binny said the growing popularity of women's cricket made the launch of the women's IPL inevitable. congratulating the board management on the inaugural season. "I would like to congratulate Viacom18 for acquiring media rights for women's IPL for five years. Women's cricket has been on the rise for a number of years and the recently concluded bilateral series against Australia is a great indication of how popular women's cricket is in India It was only fitting to create our own women's T20 league and give fans more women's cricket.

I also want to congratulate the BCCI management and its staff for a successful media rights process and wish them all the best for the inaugural edition of the Women's IPL," Binny said in a statement. BCCI secretary Jay Shah rightly congratulated Viacom18, calling the event. "historic mandate" while the development is a huge moment in the development of women's cricket in India." Congratulations to @viacom18 for winning the media rights for the women's @IPL . Thank you for your faith in @BCCI & @BCCIWomen. Viacom has committed to pay INR 951, which translates to INR 7.09 per game over the next five years (2023-2027). This is huge for women's cricket," Shah tweeted on Monday.

"Following the wage bill, today's bid for women's IPL media rights marks another historic mandate. This is a big and crucial step in empowering women's cricket in India by ensuring the participation of women of all ages. A new dawn indeed!" he added. Earlier this month, the BCCI announced that it had issued an invitation to tender for the right to own and manage a women's IPL team. "), available for a non-refundable fee. a fee of INR 5,00,000 (Rupees Five Thousand). Only) plus any applicable GST. The procurement procedure for ITT documents is given in Appendix A of this document. It is possible to buy ITT until January 21, 2023," the board's statement said.